Jackson-Weiss Syndrome (JWS) is a rare genetic disorder characterized by foot and skull abnormalities. It involves premature fusions of the skull and foot bones. It can also cause symptoms such as developmental delay and seizures.

The causes of Jackson-Weiss Syndrome are mostly genetics although it doesn't always occur every generation. The gene responsible for bone growth has a defect and over produces bone tissue. This is what leads to the abnormal bone growth.

Most children with Jackson-Weiss Syndrome will have foot abnormalities. The great toes are short and wide and they bend away from other toes. Some bones within the toes may be abnormally fused together or misshapen.

How to Treat Children's Feet with Jackson-Weiss Syndrome

Most often treatment involves surgery on the feet and the skull. If you think your child has Jackson-Weiss Syndrome, talk to you doctor. 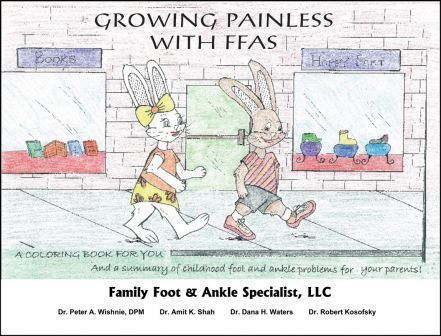 To receive your FREE kid's coloring book click here or click the image above. You can download a copy now or have a copy mailed straight to your door at no cost!